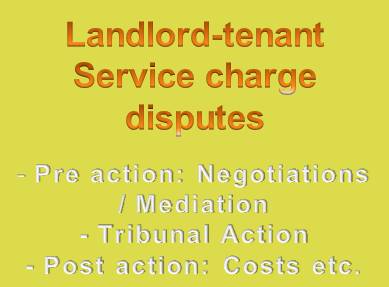 We advise on all aspect of Leasehold Service Charge issues / disputes. We offer a free 20-minute consultation

Service charge dispute resolution system is unnecessarily complex and unpredictable, although it can appear otherwise on the surface. We help with all charge disputes issues, including how to deal with landlords, superior landlords and managing agents; negotiating disputes; and resolving disputes.

In a 2-hour consultation we will advice you on:

At the First-Tier Property Tribunal (FTT)

If you wish to take the matter to the Tribunal, we recommend you do as much research as you can first. For in-depth information on how key leasehold dispute issues are dealt with by the Tribunal, and key issues the self-represented people (litigants in person) face in Tribunals and courts, see a recent paper: UNREPRESENTED LITIGANTS IN MODERN COURTS – ORDEAL BY COMBAT.

The Tribunals have in almost all case, ABSOLUTE POWERS (as they consider just and equitable in the circumstances, on whether to grant a s20C Order under Landlord and Tenant Act 1985) against the TENANTS / LEASEHOLDERS, but SEVERELY LIMITED costs powers against the LANDLORDS (e.g. for ‘wasted costs’ and ‘for unreasonably bringing, defending or conducting proceedings’ (see Tribunal Procedure Rules 2013, r 13; and the Tribunals, Courts and Enforcement Act 2007, s29).

This is because, almost all leases (of large landlords) contain a clause covering legal costs. This means that, if the Tribunal does not grant a s20c order, tenants have to pay landlords’ costs arising from the disputes. The binding law (e.g. Nicholls LJ, Farquharson LJ and Lloyd LJ) states that, where no order as to costs has been made (e.g. granting to landlords, or tenants legal costs), allowing landlords to recover these costs through the service charge is ‘indeed a case of seeking to get through the back door what has been refused at the front’ (Holding and Management Ltd v Property Holding and Investment Trust 1990, at 948).

But the First Tier Tribunal can and has ignored this:

e.g in case between a group of leaseholders of a block of flats in central London (60% of leaseholders in that bloc) against Family Mosaic Housing (now Peabody) and AVIVA Ground Rent (part of AVIVA corporation), the Tribunal received significant amount of evidence in tenants favour, including:

Furthermore, following the first day of the hearing, the Tribunal judge, Sonya O’Sullivan, stated about the manner on how service charges were invoiced “was somewhat confusing as the headings for the various components in the service charge accounts did not marry with the headings in the leases.” Judge O’Sullivan further recognised the non-transparency and complications with the charges stating that “after much discussion it emerged that Family Mosaic had not properly estimated the estimated on account payments for each year and had failed to include the estimated costs of the freeholder who provided the majority of the services. As a result the leaseholders were faced with a large balancing payment each year with little explanation.”

and that the Landlords’ accounts ‘were either wrong or misleading‘

If the Tribunal could rule against the Tenants in this case (with enormous evidence was against the Landlords) – leading to them having to pay Landlords’ cost – it will be difficult to find a case when the Tribunal would not do that (if same Tribunal / judges).

A range of interpretations by tribunals on same issues e.g. when cost are incurred

This is common and is supported by the fact that there is not rule requiring the Tribunal (First Tier) to follow precedent. In the above case, the tribunal did not for example follow decision of the Court of Appeal or even principles well-established for centuries such as interpretation of contracts as to the natural meaning of the words. The lease stated that the Service Charge was to be collected monthly (clear wording) – the Tribunal held that Landlords could recover annually half it, even though they were concealing this from Tenants – telling them it was a one off issue due to unexpected costs.

Many tactics are often used by the lawyers of landlords

Such tactics can cause real damage to your case, especially if you do not know the law well, and many other factors (e.g. biases, accent etc).

Pay attention to costs rules, which can be misleading to leaseholders /tenants